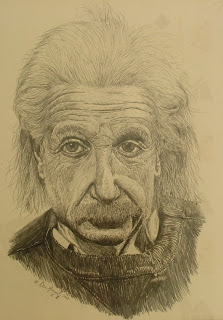 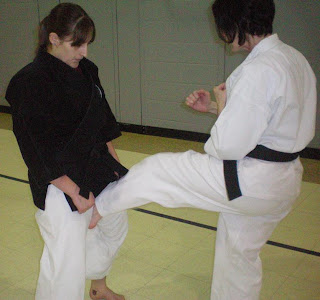 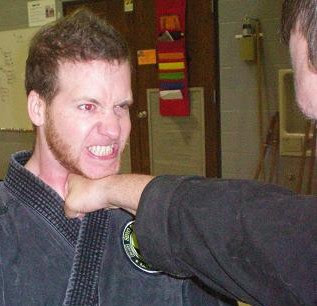 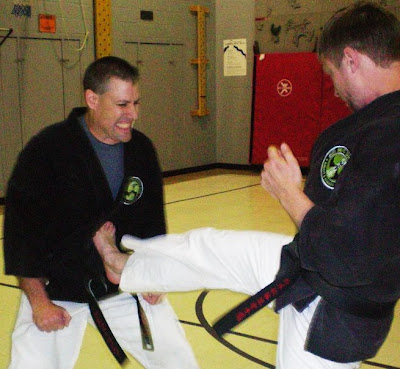 Stop by to see why we are rated as the Top Karate School in Phoenix.

Karate, Kobudo, Self-Defense and Samurai Arts for Adults and the Family at 60 W. Baseline Road. At the corner of Mesa, Gilbert and Chandler.
﻿﻿﻿﻿ 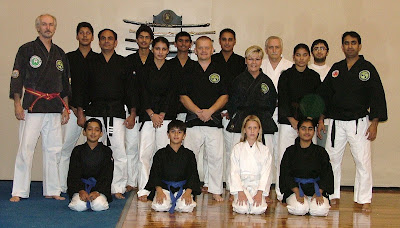 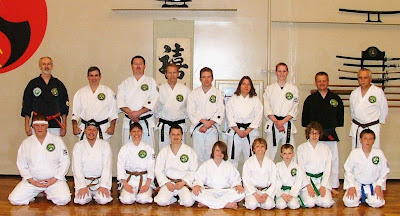 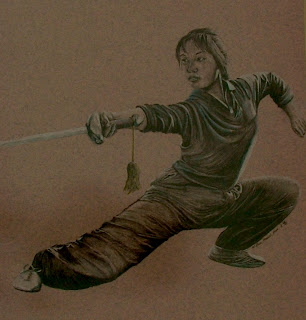 In 1999, I traveled to Murphy, North Carolina where I was granted license as Soke of Seiyo No Shorin-Ryu Karate Kobudo Kai by Dai-Soke Rod Sacharnoski. This was one of the greatest moments of my life, as I had never imagined I would achieve the level of Soke. It was doubly exciting as it was presented to me by the greatest martial artist I have ever known.


At this particular clinic, I also discovered I was Tai Chi challenged. Prior to the clinic, I had been somewhat interested in Tai Chi. In 1986; I had traveled to the outback of northern Australia, and camped along the Fitzroy River with several other diamond research geologists as part of a conference. One morning, I woke early and climbed from my tent to watch kangaroos hopping around the spinifex grass, periodic emu rushing through the brush and a Chinese delegate practice tai chi with the sunrise. I watched this performance of grace and balance to the song of a mocking bird singing from a perch in a nearby boab tree - it made me want to learn tai chi. Sketch by Soke Hausel (Tai Chi lady)..


As graceful as the tai chi dance is, I found we were incompatible many years later in Murphy. Tai chi contains continuous, graceful, slow, and unfocused kung fu movements that are unlike the powerful focused strikes and kicks of Okinawa karate. At the time of the clinic, I had more than 3 decades of karate practice under my belt. I found myself trying to mold the graceful movements of Tai Chi into focused strikes, kicks and blocks typical of karate. On that day, Tai Chi defeated me. I could not de-emphasize 30+ years of karate.

Today (2010) in Arizona we have a group in our dojo that rents time to train in Tai Chi. The Tai Chi Academy people are super and wonderful people and if I had the time, I might give it another try as it is a beautiful art to watch.

Join us at the Arizona School of Traditional Karate in Mesa - we are a martial arts school located across the street from Gilbert that is for Adults and Families.  Traditions are important and we do not compete!
Posted by Kyoju of Budo at 7:37 AM No comments: 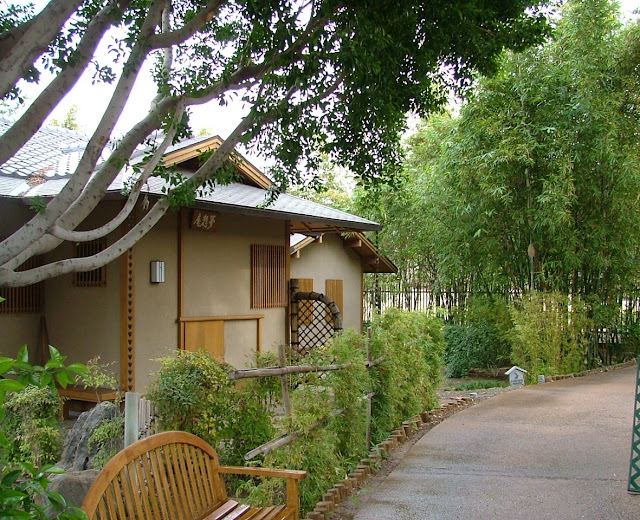 Last night, while sitting in bed and looking over some past membership lists, I start reminiscing about how traditional martial arts is really a very tightly knit group of friends or family. For instance, whenever we cross paths, we share our life experiences and provide updates about our professions and families just like family members. The reality is that we are a family.

Periodically, I receive emails, letters, visits and phone calls from various martial artists. For example, I use to look forward to hearing from Sensei Pedro Rodriguez from Puerto Rico. Pedro had an infectious laugh and personality that made you feel like you knew him all your life. It was enjoyable to hear about his experiences. Sensei Indishe Senayanake from the Sri Lanka Dojo often sends email about his experiences, geology studies martial arts demonstrations and philosophy. These are wonderful and I look very much forward to the day that I can travel to Sri Lanka.

Sensei Scott Seaton from Alaska periodically describes his fishing, hunting and guiding events. I look forward to hearing about Sensei Mike Webb‟s growing family in Canada and to discuss geology with Hanshi Andy Finley and enjoy hearing about the country and western band with Shihan-Dai Kyle Gewecke. I also get opportunities to talk with Dai-Shihan Neal Adam from Phoenix and see some of his new and creative martial arts. In other words, Seiyo Shorin-Ryu is a family, and I look forward to hearing from all of you when you get a chance.

As a rough estimate, more than 5000 people have now trained in Seiyo Shorin-Ryu. We now have members and former members from all over including many states in the US, Puerto Rico, the Navajo Nation, the Cherokee Nation, Azerbaijan, Japan, India, Sri Lanka, France, Germany, Norway, Saudi Arabia, Egypt, Canada, Italy, Russia, China, Canada, Korea and more.

I remember one earth-shaking series of email from a former student on 9/11. She was attending graduate school in New York City and witnessed first hand the attack on the World Trade Center and relayed the information to me as it was occurring. In short, I would love to hear from all of you when you get the chance.
Posted by Kyoju of Budo at 7:32 AM No comments:

First Day of Training at UW

I can remember my first day of training with Soke. I had been training in Kempo karate for nearly 2 years and was looking for something different. I heard about Soke’s class on the UW campus and decided to look into it. I introduced myself and observed a class. I was very impressed and invited to participate in the next class. I was full of nervousness and apprehension at the next class. After bowing in and stretching, the class began floor exercises. In one exercise, each person faced a partner. One person would step forward with an oi-zuki and the other person would step back with a block. This would proceed the length of the gymnasium and then back. As chance would have it, Soke was my partner. This event had a large impact on my philosophy towards training. As I punched at Soke, he would strike my wrists with great force. He explained that he liked to use full power in his training. Soke would strike and hit pressure points in my wrist and this caused a loss of feeling in my hands, which was a blessing in disguise. Although the pain was real, I was determined not to shy away and I survived. The lesson learned was an important one; train as you would fight. Lack of focus and intensity is a waste of time. Although battered and bruised I was eager for the next class.
Posted by Kyoju of Budo at 7:26 AM No comments:

A remarkable clinic was held in Corbett Gym on the UW campus in 1996. During that year, we were lucky enough to bring Dai-Soke R. Sacharnoski to teach Juko-Ryu Kijutsu to an international group who traveled to Laramie to train in this amazing martial art. During the clinic, we learned how to strengthen our necks so we could take hard blows to the throat, we learned how to accept kicks to the groin (although was not easy), kicks to the ribs, and punches to the stomach. At the end of the clinic, we witnessed a few JKI members take the master test.


This was the most incredible martial art I had ever witnessed. These people accepted full-force strikes to the neck from four different people (all at the same time), took full-force kicks to the groin and ribs, and full-force strikes to the solar-plexus while blind folded. I can tell you that no one held back on the strikes and kicks as the striking members voiced their willingness to have the opportunity to see if these people could withstand their best shots - and most did. Those members who passed the test and were successful showed no effects whatsoever from the strikes and kicks. To me, this was amazing, as I had always been taught in the past that many of these were killing blows.


VISIT OUR HUMBLE HOMBU IN MESA, ARIZONA
Map to Dojo

Our center is open to the public - we focus on Adults and Families. Come learn the traditions of Okinawan Karate & Kobudo, where much of the class is conducted in Japanese and English to help students learn Japanese. We also teach meditation, philosophy and martial arts history interjected in karate classes. Our schedule is as follows 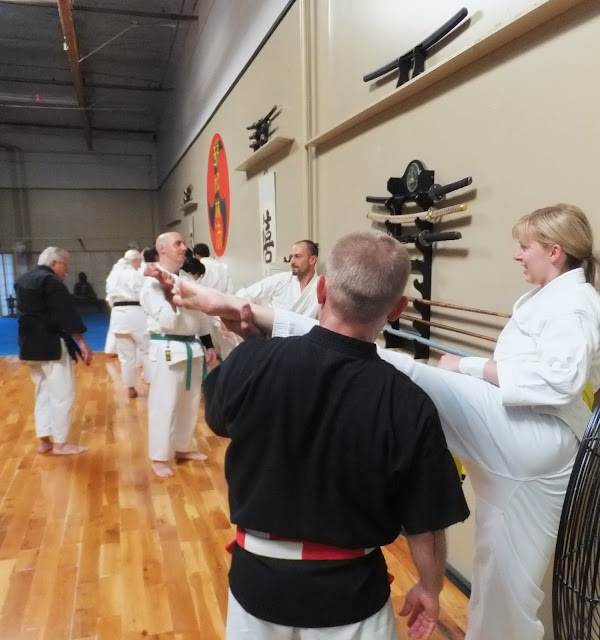 We have some of the lowest rates in the East Valley. No sign up fees. Start as soon as you pay for your first lesson or first month. You can pay either month by month or day by day - its up to you. 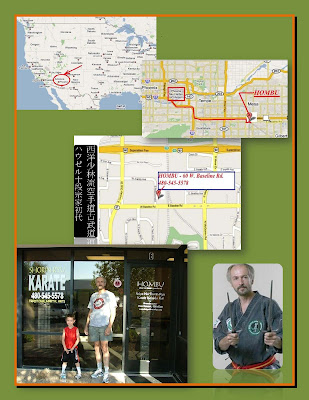 Contact Us
Posted by Kyoju of Budo at 7:19 AM No comments:

A remarkable clinic was held in Corbett Gym on the UW campus in 1996. During that year, we were lucky enough to bring Dai-Soke R. Sachar... 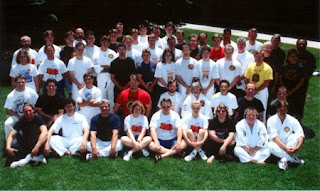